Today’s installment has been brought to you by the letter D for Dagon.

I recently re-watched Stuart Gordon’s 2001 film Dagon, an inspired, if problematic, adaptation of H. P. Lovecraft’s The Shadow over Innsmouth. Thematically more faithful to its source than Gordon’s Re-Animator or From Beyond, Dagon relocates Innsmouth from New England to Imboca, Spain, preserving Lovecraft’s atmosphere of dread and aesthetic of manifested moral decay, but adding to it Gordon’s trademark titillation and gore. 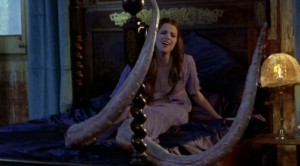 She also rather resembles the Starbucks logo.

Dagon suffers from an uncharismatic male lead and a number of CGI effects that don’t quite work. But really, that doesn’t matter, because Dagon is all about Macarena Gómez‘s gleefully-demented performance as Uxía Cambarro, the golden-tiara-wearing Deep One hybrid priestess of the Esotérica Orden de Dagón. 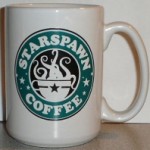 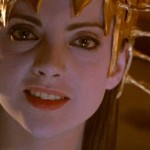 Sexy.
Just the kind of girl you’d like to ask out for coffee and fish flakes, right?
“Coffee?
I’d love to.”

So if you’ve got a touch of the Innsmouth look, or you find batrachian girls kind of hot (you know who you are), Dagon comes recommended. As does this T-shirt.

Here’s Lovecraftian surf-punk band The Darkest of the Hillside Thickets, with their hit song, “The Innsmouth Look” (it charted–with a bullet–in Imboca). Sing along!