We’ve told you about the Cthulhu Summer at Night Shade Books, with Jonathan Wood’s No Hero, John Hornor Jacobs’ Southern Gods, and my own The Book of Cthulhu, but here are some of the other Mythos-related releases I’m looking forward to…

So far, I’ve only heard two tracks from Ogham Waite and the Amphibian Jazz Band’s Live at the Gilman House, but wow. The first, “My Slimy Cephelopod,” is featured on a sneak preview page at HPLHS; the other, “Some Wonderland Undersea,” closed out a recent episode of The H.P. Lovecraft Literary Podcast.

Now, I’m not typically a fan of filk, but Live at the Gilman House transcends the conventions (and conventions) of bardic fandom by bringing to the table 1) a top-notch backup band and 2) one of the best Tom Waits impressions I’ve heard — and I say that as someone who once worked in a record store frequented by the Grammy-winning Rock and Roll Hall of Fame inductee. I’m quite familiar with Tom Waits’ voice and mannerisms, and Ogham Waite, whoever he may actually be, nails it. If I’ve got any complaint, it’s that I can’t pre-order the album (this is going to be an LP, right?) right now (and I’m holding off ordering De Farbe until I can). 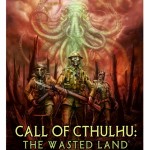 Chaosium and Red Wasp Design‘s Call of Cthulhu-based, World War I-set, iOS video game, Call of Cthulhu: The Wasted Land is another forthcoming Mythos-related item that’s got my attention. I’m no hardcore gamer, and the odds of my finishing any given video game are pretty much nil (I’d much rather read), but with a teaser image this badass, I’m ready to buy it.

On a more placid note, I’m also looking forward to Twisted in Dream: The Collected Weird Poetry of Ann K. Schwader, coming from Hippocampus Press in October. Ann K. Schwader‘s story “Lost Stars” is included in The Book of Cthulhu, and come September, I think many of you will be as astonished by it as I was when I first read it. I don’t believe this is the final cover for Twisted in Dream, but it was too cool an image not to hotlink.