The story of Jack the Ripper captured lurid headlines and the public’s imagination, and the first fictionalization of the Ripper killings, John Francis Brewer’s The Curse Upon Mitre Square appeared in October of 1888, mere weeks after the discovery of Jack’s first victim. Since then, hundreds of stories have been written about Bloody Jack, his victims, and his legacy. Authors ranging from Marie Belloc Lowndes to Robert Bloch to Harlan Ellison to Roger Zelazny to Alan Moore have added their own tales to the Ripper myth. Now, as we arrive at the quasquicentennial of the murders, we bring you a few tales more.

From Word Horde and the editor who brought you The Book of Cthulhu and The Book of Cthulhu II comes Tales of Jack the Ripper, featuring new and classic fiction by many of today’s darkest dreamers, including Laird Barron, Ramsey Campbell, Ed Kurtz, Joe R. Lansdale, Joseph S. Pulver, Sr., Stanley C. Sargent, E. Catherine Tobler, and many more. 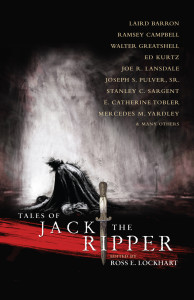 To request a copy for review or arrange an interview, email:
publicity[at]wordhorde[dot]com.

“The enduring allure of H.P. Lovecraft’s Cthulhu Mythos, now nearly a century old, is evident in this representative anthology of modern tales, most of which were written in the last decade. The breadth of cosmic horrors they evoke range from the parochial fear of monsters found in Michael Shea’s ‘Fat Face,’ to the apocalyptic doom forecasted in Ramsey Campbell’s ‘The Tugging.’ Some of the stories, notably Brian Lumley’s ‘The Fairground Horror’ and Brian McNaughton’s self-consciously satirical ‘The Doom that Came to Innsmouth,’ are ripe with Lovecraftian references. Most others, including Joe R. Lansdale’s weird western ‘The Crawling Sky’ and Laird Barron’s backwoods monster tale ‘The Men from Porlock’ (original to the book), are more oblique and allusive. To the book’s credit, none of the twenty-seven stories read like slavish Lovecraft pastiche, which makes this volume all the more enjoyable.” –Publishers Weekly (Starred Review)

“Gathering Cthulhu-inspired stories from both 20th and 21st-century authors, this collection provides such a huge scope of styles and takes on the mythology that there are sure to be a handful that surprise and inspire horror in even the most jaded reader.” -Josh Vogt, Examiner.com

“There are no weak stories here–every single one of the 27 entries is a potential standout reading experience. The Book of Cthulhu is nothing short of pure Lovecraftian gold. If fans of H. P. Lovecraft’s Cthulhu mythos don’t seek out and read this anthology, they’re not really fans – it’s that simple.” -Paul Goat Allen, BN.com

“…thanks to the wide variety of contributing authors, as well as Lockhart’s keen understanding of horror fiction and Lovecraft in particular, [The Book of Cthulhu] is the best of such anthologies out there.” -Alan Cranis, Bookgasm.com

“The Book of Cthulhu is one hell of a tome.” -Brian Sammons, HorrorWorld.org

“…an impressive tribute to the enduring fascination writers have with Lovecraft’s creation. […] Editor Ross E. Lockhart has done an excellent job of ferreting out estimable stories from a variety of professional, semi-professional, and fan venues […] to establish a sense of continuity and tradition.” -Stefan Dziemianowicz, Locus

“As he did for his previous anthology, Lockhart has cast his net far and wide to haul in outstanding stories from publications both well-known and obscure, none sampled more than once. He has also commissioned four new stories, several so good that they are likely to be selected for reprint anthologies in the future.” -Stefan Dziemianowicz, Locus

“…any fan of Lovecraft can’t afford to miss out on this one.” -Justin Steele, The Arkham Digest

“The second volume of The Book of Cthulhu exemplifies the richness of Lovecraft’s legacy: gloomy terror, mystery, thrills, vivid action, chilling visions, satire, science fiction, humor–all of that, and then some, is crammed into more than 400 pages awaiting readers eager for some apocalyptic horror.” -Dejan Ognjanovic, Rue Morgue