November 13, 2012
by Ross E. Lockhart
Comments Off on The Book of Cthulhu II reviewed at BookGasm

Alan Cranis reviews The Book of Cthulhu II for Bookgasm, saying “This follow-up anthology is every bit as fine as its predecessor,” and singling out as particularly noteworthy the stories by Fritz Leiber, Neil Gaiman, Michael Chabon, and Christopher Reynaga.

Read the whole review by clicking here or on the book cover above!

From the moment we announced the free (with SASE) Fear the Weird stickers, we’ve been inundated with one question: where are the T-shirts? 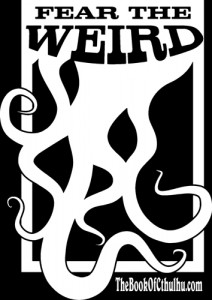 Wonder no longer. We can’t wait to wrap our tentacles around your torso.

Now available from independent T-shirt vendor Skurvy Ink: Glow-in-the-dark Fear the Weird tentacle T-shirts. You know you want one. Protect yourself from the Great Old Ones and warn others! Spread the Weird! Sizes range from night gaunt to shoggoth (girlie sizes too!). Just click here to order.

The Book of Cthulhu II, twenty-four more tales of tentacles, terror, and madness inspired by H. P. Lovecraft will be in stores everywhere October 2, 2012. Pre-order at Amazon.com.

August 1, 2012
by Ross E. Lockhart
Comments Off on The Book of Cthulhu II is off to the printer

It’s official! The Book of Cthulhu II files have been approved by Night Shade Books and have now been uploaded to the printer. The book will be available in stores everywhere October 2, 2012. Here’s a peek at the final cover, and you can pre-order the book by clicking here. 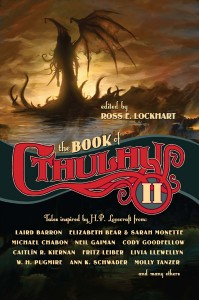 Interested in being a member of the street team promoting The Book of Cthulhu II? Want some free stickers? Feel like your neighborhood needs more tentacles? Just send a SASE to: 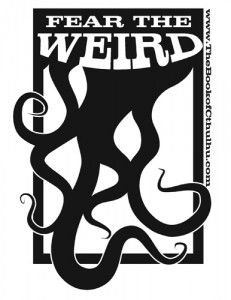 I’ll send you a handful of stickers featuring this image to help decorate your reality. Fear the Weird! Cthulhu fhtagn!

The Book of Cthulhu II, twenty-four more tales of tentacles, terror, and madness inspired by H. P. Lovecraft will be in stores everywhere October 2, 2012. Pre-order at Amazon.com.

As the planet Venus moves across the face of the sun, the Great Old Ones stir in their beds, and the universe is ripe for a big announcement. So here goes… the official announcement of the Table of Contents for The Book of Cthulhu II, coming in October from Night Shade Books… END_OF_DOCUMENT_TOKEN_TO_BE_REPLACED

February 24, 2012
by Ross E. Lockhart
Comments Off on You wanted a secret… Cthulhu 2: Electric Boogaloo

Earlier tonight, I said on Twitter and Facebook that if The Book of Cthulhu made it to 100 likes on Amazon.com this weekend, I’d share a secret. We just hit a hundred, so here you go…

Etsy is a strange place, filled with terror and wonder. And earlier tonight I risked my sanity by going to Etsy to search for Cthulhu.

Why? For you, dear reader…

November 28, 2011
by Ross E. Lockhart
Comments Off on The Book of Cthulhu in the News

Laird Barron’s “The Men from Porlock,” which appears in The Book of Cthulhu, has been listed in the Long Fiction category for this year’s Bram Stoker Award Reading List.

And The Book of Cthulhu is listed on author Garrett Cook’s Bizarro, Weird and Wonderful Holiday Gift Guide, wherein Cook describes the anthology as “A must have for the discriminating cultist.”

This just in… we’ve had a few requests to extend the 24 Hour #FeedCthulhu Feed the Hungry Twitter Challenge.

Some people just got the note, couldn’t #FeedCthulhu on time, or were planning to make a donation before meeting up with friends and family.

That’s fine. If you keep giving, and keep Tweeting #FeedCthulhu, I’m happy to keep the doors open until midnight Thanksgiving.

All you have to do is make a donation–any donation, so long as someone gets fed–then Tweet: I fed Cthulhu [your donation] to [organization] #FeedCthulhu @lossrockhart

That’s it. You #FeedCthulhu and you’re entered to win a copy of The Book of Cthulhu, either an e-book or a signed, personalized copy.

Hi, my name is Ross E. Lockhart, and I’m the editor of The Book of Cthulhu, an anthology collecting twenty-seven tales of cosmic horror inspired by the writer H. P. Lovecraft. Many consider Lovecraft to be one of the greatest American writers of the twentieth century. Literary movements from supernatural horror to magical realism to cosmicism to Bizarro have been influenced by Lovecraft’s body of work and his grandest creation… the Cthulhu Mythos.

H. P. Lovecraft died in 1937 at the age of 46. His decline and early death can be blamed, in part, on poverty and malnutrition.

Thursday is Thanksgiving Day in the United States, a holiday where we celebrate our national prosperity and providence. But people in the United States still go hungry. And hunger sucks. So I have a challenge for you. You have twenty-four hours to make a difference. The clock starts at 12:01 am Pacific Standard Time on Wednesday, November 23, 2011, and runs until 11:59 pm PST Thanksgiving night.

During that twenty-four hour period, twenty-four randomly selected people who make a food or monetary donation—no matter how small—to a food charity—this can be a local food bank, church, temple, coven, a bin outside your grocery store, or national hunger relief organization—doesn’t matter, so long as they’re feeding people—those twenty four people will each get a free e-book of The Book of Cthulhu via e-mail (ePub format). If you were planning to make a food donation anyway, that’s great. If you’ve never done it before, even better. All you have to do to enter is make a donation, then Tweet the following:

Don’t forget to include the hashtag (#FeedCthulhu) and my Twitter handle (@lossrockhart) so that I can see the post.

I’ll choose and contact the winners through Twitter on Thanksgiving Day, and arrange to e-mail you your e-book copies of The Book of Cthulhu.

But there’s more. For three randomly selected entrants I will also send a signed, personalized copy of The Book of Cthulhu anywhere in the United States. This can be for you, or this can be a gift for a friend, it’s just my way of saying thanks for making a difference.

#FeedCthulhu and Feed the Hungry this Thanksgiving. And thanks.